Cold Feet is a Nigerian movie directed by Moses Inwang which drives home quite a number of lessons on marriage and relationship.

In the movie, colonel Mayowa (Jim Iyke) takes his wife Omoye (Joselyn Dumas) to a beautiful resort to celebrate their 5 years wedding anniversary. Unexpectedly, Omoye runs into Tare (Eyinna Nwigwe), a guy whom she had a fling with few weeks to her wedding. Tare who came for the purpose of proposing to his girlfriend Temi (Beverly Naya) abandons his mission and makes obsessive attempts to rekindle old flames with Omoye.

There are many things to love about this movie.

To start with, all the actors brought in their A games. Joselyn Dumas beautifully interpreted her role that you’d look forward to seeing her in every scene. Eyinna Nwigwe, who is known for the ‘lover boy’ character in most movies he has featured in didn’t fail in portraying the passion needed. Ever classy Beverly Naya was just on point at every scene. Surprisingly, the candy Jim Iyke who’s known to be the ‘bad boy’ in most of his movies delivered well as a middle aged loving and supportive husband who would do anything for his woman.

The cinematography is topnotch as aerial shots of the resort were exquisitely captured. If the aim was to advertise the resort, they delivered!

One very glaring lesson to take home from this movie is the fact that emotions are very fickle and in most cases, what we want may not really be what we need. Relationships built on emotions solely are likely to hit the rock as there is a thin line between LOVE and LUST. Love goes way beyond the physical attraction.

However, it may come off as being annoying to see that Omoye finds it not too easy to choose between her loving husband and a passionate lover whom she is basically sexually attracted too. Also, despite being cheated on, colonel Mayowa still puts efforts into having his wife back; amusing, right?

The issue of forgiveness which this movie aptly captures seems good as humans are always bound to make mistakes, hence, forgiveness is very paramount in a relationship or marriage and life generally.

Although, you may get too carried away with the soothing story line and happy ending of how two adults who deliberately cheated on their partners were forgiven and figured out their lives easily, don’t forget that every one cannot be a ‘Mayowa’ or ‘Temi’ who would take back cheating partners without stressing it. Irrespective of the subtle manner it is portrayed in this movie, cheating is capable of permanently ruining a marriage or a relationship.

Generally, I enjoyed Cold Feet. The story line is very relatable and realistic, spiced up with little comedy, that alone can make you glued to your screen.

You can stream Cold Feet on Netflix or Download HERE. 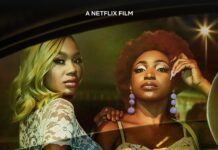